Detroit: Where Motors, Migration, and Might Helped Jumpstart an Economic Reinvention

Most entrepreneurs spend a lot of personal and professional capital for a shot at meeting with well-connected power brokers in corner offices. But in Detroit, a large and growing group of savvy, business-minded folk place their eyes on a different prize. Here, business owners belong to a tight-knit community of 670,000 stretching 139 square miles. Although they welcome support, funding, and collaboration from like-minded partners, their focus is on their community. Aaron Foley — journalist and author of How to Live in Detroit Without Being a Jackass —  says the predominantly Black city in Southeast Michigan interconnects in a way other places aren’t. Meaning, Detroit has an exceptionally supportive environment for entrepreneurs. However, Foley notes that people cannot go in with a “gold rush” attitude that they do in other communities.

“In other places, a lot of entrepreneurs come and offer up something that isn’t really necessary in that market,” Foley says. “Here in Detroit, people let you know really quickly if it’s needed or not.”

That feedback served as the foundation for Detroit’s resurgence, which focused on community. A funding source known as the New Economy Initiative shifted priorities after the city’s bankruptcy, CNN reported in 2018. Shortly after, the initiative’s budget devoted more grants to non-tech and neighborhood businesses. Overall, programs like this have helped more than 5,000 neighborhood-based businesses gain technical support. 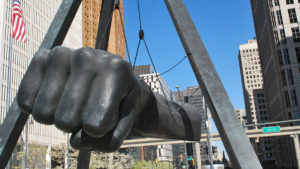 Mexican-American sculptor Robert Graham created “Monument to Joe Louis,” which is known as “The Fist” and sits in Detroit’s Hart Plaza. (Photo courtesy of Kaleidico Digital Marketing on Flickr)

While downtown and midtown help define the entrepreneurial environment in Detroit, other areas of the city also drive the show. Foley says areas such as the Avenue of Fashion between McNichols and Seven Mile roads serve as prime real estate for art galleries, coffee shops, restaurants, and clothing stores. Immigrants from El Salvador, Mexico, and Venezuela brought taquerias and shops to Southwest Detroit, especially along Michigan Avenue. East of downtown, the West Village neighborhood offers a mix of residential areas, bars, gyms, small boutiques, and even a James Beard Award-winning pie shop.

Recent years have seen a burgeoning social entrepreneurship scene. The Build Institute, a resource hub for businesses, champions ventures that fit that mold and hosted a “Social Entrepreneur Day” to strengthen awareness of such ideas. Informally, Detroiters who are passionate about social entrepreneurship connect and mingle on social media. And at Wayne State University, the school of social work markets classes and a conference for people who want to delve deeper into how these types of businesses operate.

This environment is a long time in the making. The Great Migration drove a booming personal care industry with barbershops and beauty salons. For entertainment, the Black business district known as Paradise Valley brought musicians like Dinah Washington, Ella Fitzgerald, Cab Calloway, and others. A highway was eventually built and cut through the district, ceasing its existence. Another district, an immigrant area known as Poletown, was also lost when General Motors seized the surrounding land through eminent domain. 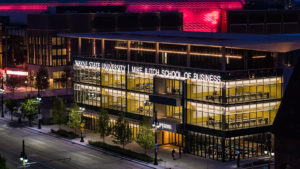 Of course, the automotive industry in the early 1900s also spurred adjacent industries like tie rods for wheels, alternators, and other parts that make up a car, Foley says. It even impacted the food scene, which lives on with diners known as Coney Islands. “If you were working at a car factory and you only had five bucks, you’d go to one of these immigrant-owned diners and get a full meal for 10 cents or 20 cents,” says Foley. “It eventually became a big part of Detroit’s food cuisine.”

Looking ahead to Detroit’s future, Foley noted that Ford recently purchased land on the border of the Southwest area of the city, presenting a potential threat for gentrification.

“As the city starts to recover and as more people are interested in living in the city versus living in a more expensive place, like New York or Austin or something like that, will they end up displacing a lot of these businesses when they come?” Foley says. “That’s kind of the phase we’re in now.”

Still, residents have worked to rejuvenate the city’s economy through new businesses and startups. The barriers to entry — real estate costs or loan approvals — are more manageable in Detroit than in large coastal cities. Just a few businesses we highlight include a jewelry shop aiming to reduce poverty, fresh produce pop-ups, and graduation gifts.

During National Black Business Month, learn more about 12 enterprises in Detroit. These businesses carry on the tradition of innovation that’s lived on in Detroit for centuries.

Andrea Guzmán is a staff writer for Socially Driven. She received her master’s degree at the S.I. Newhouse School of Public Communications, where she’s reported for the Syracuse community. In her downtime, the Texas native enjoys supporting local taquerias, reading memoirs, and hanging out with her cat.

Andrea Guzmán is a staff writer for Socially Driven. She received her master’s degree at the S.I. Newhouse School of Public Communications, where she’s reported for the Syracuse community. In her downtime, the Texas native enjoys supporting local taquerias, reading memoirs, and hanging out with her cat.