The Rug Company that Transformed the Lives of 40,000 Women in Rural India

When Nand Kishore Chaudhary studied the Indian carpet-making industry, he found that it lacked innovation, technology, connectivity to global design trends, and efficient production processes. But more than the inefficiency and lack of innovation bothered him. He also noticed practices such as the reliance on child labor, infringement of money by middlemen, and weavers who were treated as social outcasts and untouchables as opposed to valuable artisans.

He wanted to build a different company, one that leveraged innovation, cutting-edge technology, and social good. “Let goodness, fairness, and most importantly, love prevail in business; profits will inevitably follow,” Chaudhary says.

That directive launched Jaipur Rugs in 1978 when Chaudhary, the current chairman and managing director, decided to combine his love for beautiful patterns and craftsmanship with his quest for social justice and to form his own enterprise. At the time, he worked in his father’s shoe shop in his hometown of Churu, Rajasthan. Chaudhary borrowed a sum of 5,000 rupees, or $67, (which is equivalent to roughly 114,080 rupees, or about $1,500, in 2020) from his father and began his journey with nine artisans and two looms. More than 40 years later, the mandate remains the same: Empower marginalized communities, especially women, living in the underserved areas of rural India. 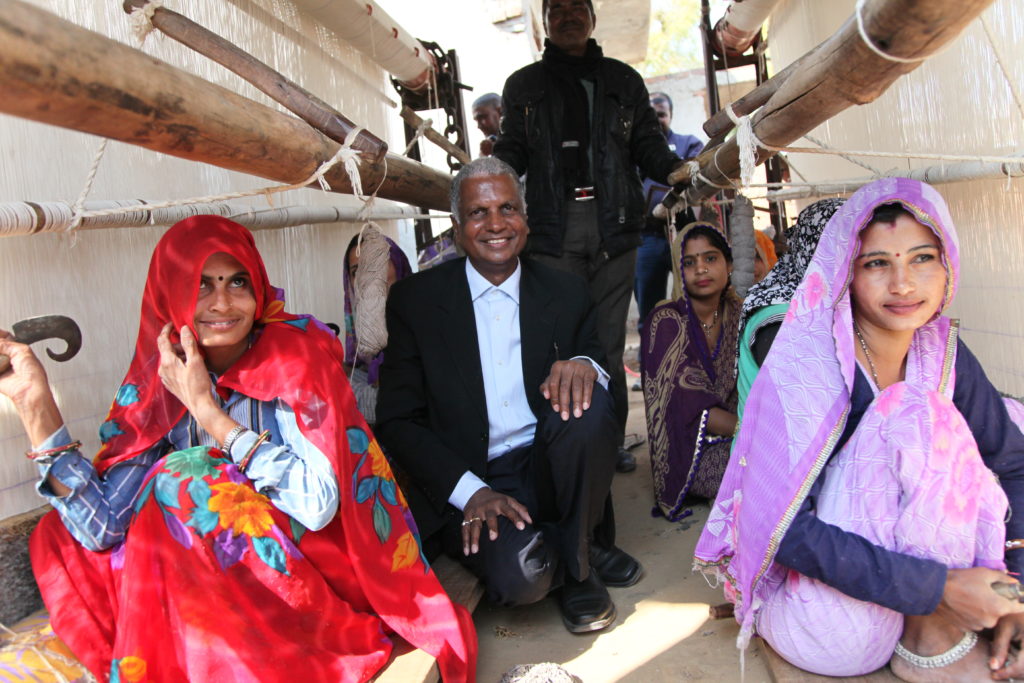 He acts on his initial mandate by developing his weavers’ skills and providing them with a sustainable livelihood. To begin that process, he trains potential contractors in skills essential to rug making such as how to weave hand-knotted rugs using a manually operated loom. These women are selected from villages in some of the most economically disadvantaged areas of western and northern India, specifically the states of Rajasthan, Gujarat, Uttar Pradesh, Jharkhand, and Bihar.

The company then sells the rugs globally – while most sales are to retail outlets overseas like the United States, an increasing number are now being sold within India. Along with growing their artisan base at home, their online store continues to sell the finished products to more than 60 countries around the world. Rugs and carpets vary in size, color, shape, material used, and different styles or patterns. Prices can range from less than $100 to more than $50,000.

Chaudhary began recruiting women from these villages through the Jaipur Rugs Foundation, which he established in 2004 under the Rajasthan Public Trust Act. The foundation sought to establish bonds within the local communities, which vary in terms of ethnicity and religious populations. Today, after a one- to three-month training period, the skilled weavers receive government subsidies to install looms in their homes through connections and contracts made between the government and the Jaipur Rugs Foundation.

The women typically make around 250 rupees a day (just more than $3). For some, that income becomes the first money they have earned and helps them sustain their families and cover daily expenses. A monthly stipend is also given depending on the quality of the rug they are making and its production time.

Weavers can also earn extra income through various incentive programs such as producing a rug with zero defects, zero wastage of material, and early completion of a rug. This created a model of inclusive growth where the women artisans gained financial and emotional stability. 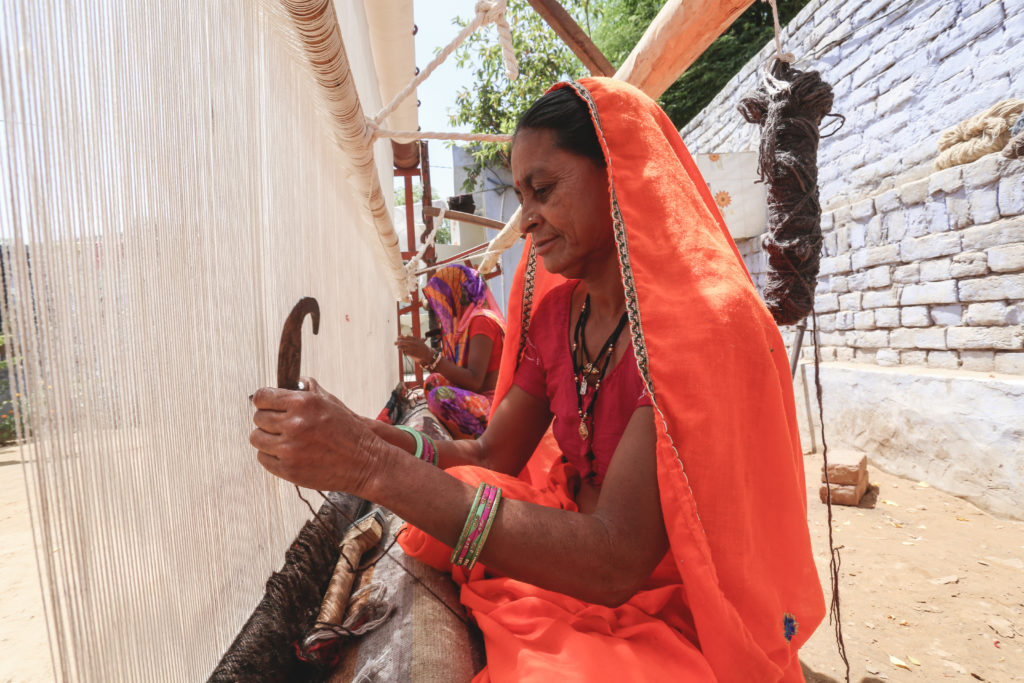 The weaving process, also known as hand-knotting, can take two months to a year depending on the quality and size of the rug. (Photo courtesy of Himanshi Singh)

That stability attracted Prem Devi, a 30-year-old mother of three, who leveraged her weaving hobby to earn extra income. One day, she heard of a training program and a potential job that involved her hobby. “I was terrified,” Devi says. “I didn’t sleep for days. What would I be expected to do? Is it really worth it? Will I be able to do it? Who will take care of my kids?” The training surprised her. She realized that the organization was identifying and developing grassroots leaders called Bunkar Sakhi, who would be responsible for maintaining the quality of the rugs.

“As I diligently absorbed the training, I knew I had to work hard to prove them right about me,” Devi says. “However, it was probably the first time in years that I felt powerful. I love being a weaver’s friend, a guide, a Bunkar Sakhi, as it has transformed my existence as an individual and changed the course of my life. From someone who hesitated to consciously get out of her house, to visiting every loom in the village every day, I feel empowered. Nothing is impossible.”

Devi oversees the work of more than 100 artisans who started out just like her. Opportunities such as this have helped thousands of unskilled women — who are often bound by tradition and society in a rigid caste system that remains dominant in India — to become master artisans. A standardized design plan or “map” that shows them how to produce pre-designed patterns made by recognized designers is provided. Quality control officers such as Devi visit the artisans regularly to ensure both the product’s quality and a smooth production system. These inspectors track the progress and ensure that no disruptions such as a shortage of yarn occur.

“Artisans are the core to Jaipur Rugs; any work we do and any plan we make, they help the company grow,” says Himanshi Singh, the research and marketing manager of Jaipur Rugs. “Our goal is to cut out the middlemen that control the carpet making value chain in India by directly connecting with rural artisans and selling their products to buyers in overseas markets. I wanted to work with something that was not just a charity but actually provided a source of livelihood to people. Jaipur Rugs is the place where I found my instant connect.”

Due to the current global pandemic, Jaipur Rugs’ unique business model allows weavers to continue to receive raw material at their homes, making them the primary source of income for the family. The weavers can also report any difficulties they face to their quality supervisors digitally, through an app called Tana-Bana, which sends alerts to the main office in Jaipur, Rajasthan, in real time and helps foster problem resolution without face-to-face interactions.

The online store is currently the only place where rugs can be bought due to the temporary closure of physical stores in cities such as Jaipur, Delhi, and Mumbai in India and Atlanta in the U.S. The site features collections made in collaboration with designers such as Gauri Khan, Kavi Chaudhary, and Matteo Cibic.

Another highlighted section is called Manchaha, or Desired, which highlights artisan originals. These rugs are left to be made using entirely the weavers’ desired design and rural craft. This allows weavers who come from different states of the country, each boasting a different ethnic style and rural tradition, to nurture their own creative potential and produce rugs that speak to their own lived experiences and local culture.

Alpa Kothari, from Rajkot, India, found Jaipur Rugs through Instagram and has been following the page ever since. “I’m very interested in home décor, so Instagram suggested their account,” Kothari says. “The entire idea to incorporate business as well as corporate social responsibility is what really caught my attention. They help preserve traditional cultures from rural India while empowering women and help boost the Indian economy.

Kothari recently bought a new home and hopes to adorn it with a rug from Jaipur Rugs. “I like their rugs a lot,” Kothari says. “I would definitely buy from them because of their traditional folk designs and aesthetic appeal.”

Veer Badani is a staff writer for Socially Driven. Originally from Rajkot, India, he received a bachelor’s degree in journalism with a minor in sports studies from Ithaca College in 2018. He received a master’s degree in magazine, newspaper, and online journalism with a sports communications emphasis from the S.I. Newhouse School of Public Communications at Syracuse University in 2020.

The Entrepreneur, Author Who Broke the Silicon Valley Mold Next post

Veer Badani is a staff writer for Socially Driven. Originally from Rajkot, India, he received a bachelor’s degree in journalism with a minor in sports studies from Ithaca College in 2018. He received a master’s degree in magazine, newspaper, and online journalism with a sports communications emphasis from the S.I. Newhouse School of Public Communications at Syracuse University in 2020.

Jaipur Rugs isn’t the only company making a difference for marginalized communities by opening new opportunities. Here are just a few other organizations that utilize their business models to impact the lives of those in need.

Prosperity Catalyst
Prosperity Catalyst is a nonprofit organization that was founded by Siiri Morley in 2012 that is focused on areas in Iraq and Haiti. The company provides a platform “to build up women-led businesses in distressed regions by providing business and technical training,” allowing women entrepreneurs and leaders to flourish. It inspires and empowers those who join to contribute by creating systems of support with local businesses and suppliers. It also connects new women entrepreneurs with other strong women both in and out of their own countries.

Matr Boomie
Matr Boomie – which translates to “motherland” in Sanskrit – was started in 2006 by Manish Gupta and Ruchi Agrawal. Their goal is to bridge the gap between two disparate cultures through the blending of traditional art from India with a modern design aesthetic. With the help of more than 1,000 artisans throughout India and by working directly with marginalized communities, Matr Boomie seeks to create new economic opportunities. Based in Austin, Texas, Matr Boomie aims to raise wages by offering skill-building workshops in order to help artisans raise their abilities and create higher quality goods.

Jibu
Jibu, co-founded by Galen and Randy Welsch, is a for-profit company that looks to provide lasting access to affordable drinking water. They’re not just looking at water, however. Their ultimate goal is to help build a network of locally owned franchise businesses in East Africa, to support independent social entrepreneurs with the goal of revolutionizing the African market, and to increase resources for emerging markets.

Kirah Design
Gabriela Flores told Forbes that she started Kirah Design after she returned home to Bolivia when she was 25 and saw the levels of poverty and inequality. Kirah Design is founded on the business of designing and marketing high-end interior accessories that are crafted by rural artisans in low-income areas. Through the business model, the Bolivian artisans who craft the pieces from recycled glass, wood, and textiles have found sustainable job opportunities that allow them to create eco-friendly works.

Good Paper
Founded by Jimmy Quach in 2008, Good Paper looks to restore the human spirit through the use of handmade cards. The company provides job opportunities to women who escaped sex trafficking in the Philippines and young adults orphaned by disease in Rwanda. It also provides a way for these marginalized communities to reconnect and restore their faith in humanity and the beauty in the world, one card at a time.

Maya Traditions Foundation
Maya Traditions was founded in 1996 by the late Jane Stiller Mintz with an important mission: “To help indigenous female artisans improve the quality of their work and preserve their culture by helping them compete in the global Fair Trade marketplace.” The company is based in Panajachel, Guatemala, where they collaborate with seven indigenous communities and support more than 500 indigenous Mayas through their educational programs.

Carpenters Without Borders
Carpenters Without Borders, established by Dennis Martin and woodworker Dan Stalzer, teaches indigenous people in rural Guatemala the craft of woodworking with the most basic of tools: a shave horse and drawknife. By removing the need for electricity or hardware by using these simple tools, they’re able to give people the skills that they need to make a living, even in remote areas, by producing high-quality furniture and other goods.