As I’d just finished my makeup and prepared to record a news standup, a classmate admired my “natural beat,” and told me I’d be a great face for a cosmetic line. “Wow, thanks!” I responded, before asking, “Whose cosmetic line, though?” She shrugged. With a lack of Black representation in the cosmetic industry, that was a good question that I needed to find an answer to. A few years later, my nail tech told me the same thing, and I responded with the same question. Then she told me the answer I needed to hear, “Girl, make your own.” That day, I went home and Googled, “How to start a cosmetic line.” Less than a year later, I did. After much research and planning, I launched The K’Luxe Experience, a vegan and cruelty-free cosmetic line, in July 2019.

Business has been going as expected: sales booming one week, none for a few more. But I always felt like something was missing in my business’ DNA. I needed a social good aspect. I’d always ask myself, What makes K’Luxe unique? In the near future, I plan on adding products to further set the brand apart from a Fenty, Kylie, or MAC, and I have a desire to help women. For example, beyond the line of products I currently have and receive from a distributor, I want to have another line of K’Luxe products – lip glosses and lipsticks – that are homemade. Creating Socially Driven has assisted a lot in my research of transitioning my business from a revenue-seeking one to a socially driven one.

One of the points I came across when researching how to start a business was the importance of finding a mentor. Luckily, motivated, business-minded people occupy my hometown – Detroit. But I drew upon my connections because I despise the cold-call or the cliché, “Hi, my name is Kyla. Can you be my mentor?” email. I remembered a mentor from a high-school business camp that I both participated in and worked at as a coach. I never called David Gamlin – former director of student engagement at New Detroit, the company that operated Camp Enterprise – about K’Luxe. But his professional development speeches, raw advice, and lessons kept me motivated during the beginning stages, and even now. Since our first interaction when I was a sophomore, he always expressed confidence in my abilities as a student and encouraged any aspiration, always calling me a “superstar.” When I would question myself, or others would question me, I’d remember how he always told me I was destined for greatness and to never let anyone tell me otherwise. His encouraging words bolstered me when I doubted my idea or my abilities. When I told a friend of mine I was launching a beauty business, and they responded with, “You should do something you’re good at,” I would remember his faith in me, and shake it off and move on.

But those exchanges often possessed the power to discourage me at the time and haunt me later. In fact, that conversation replayed in my head often when considering my transition to social entrepreneurship, and I asked myself many times, What makes me different? 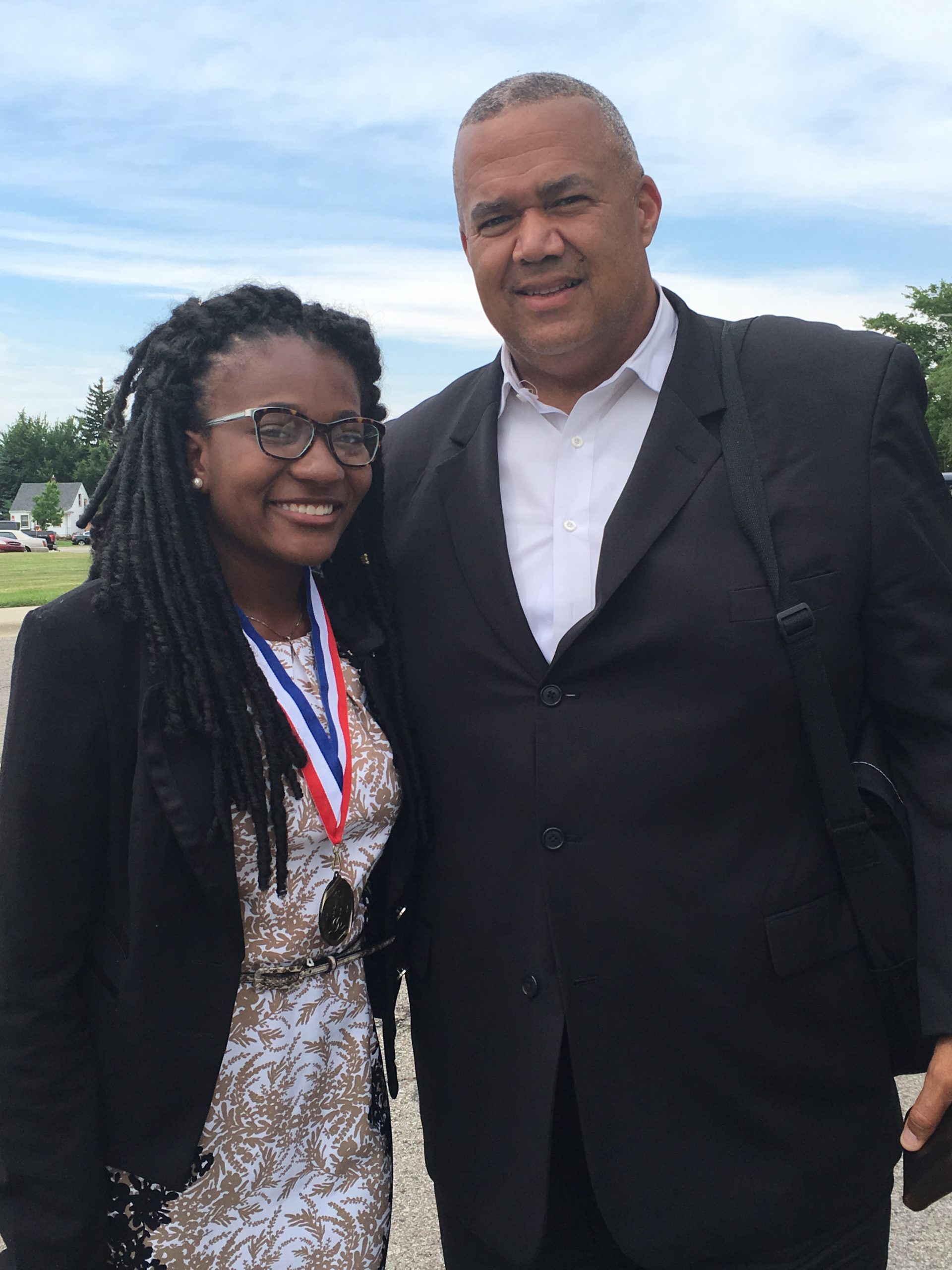 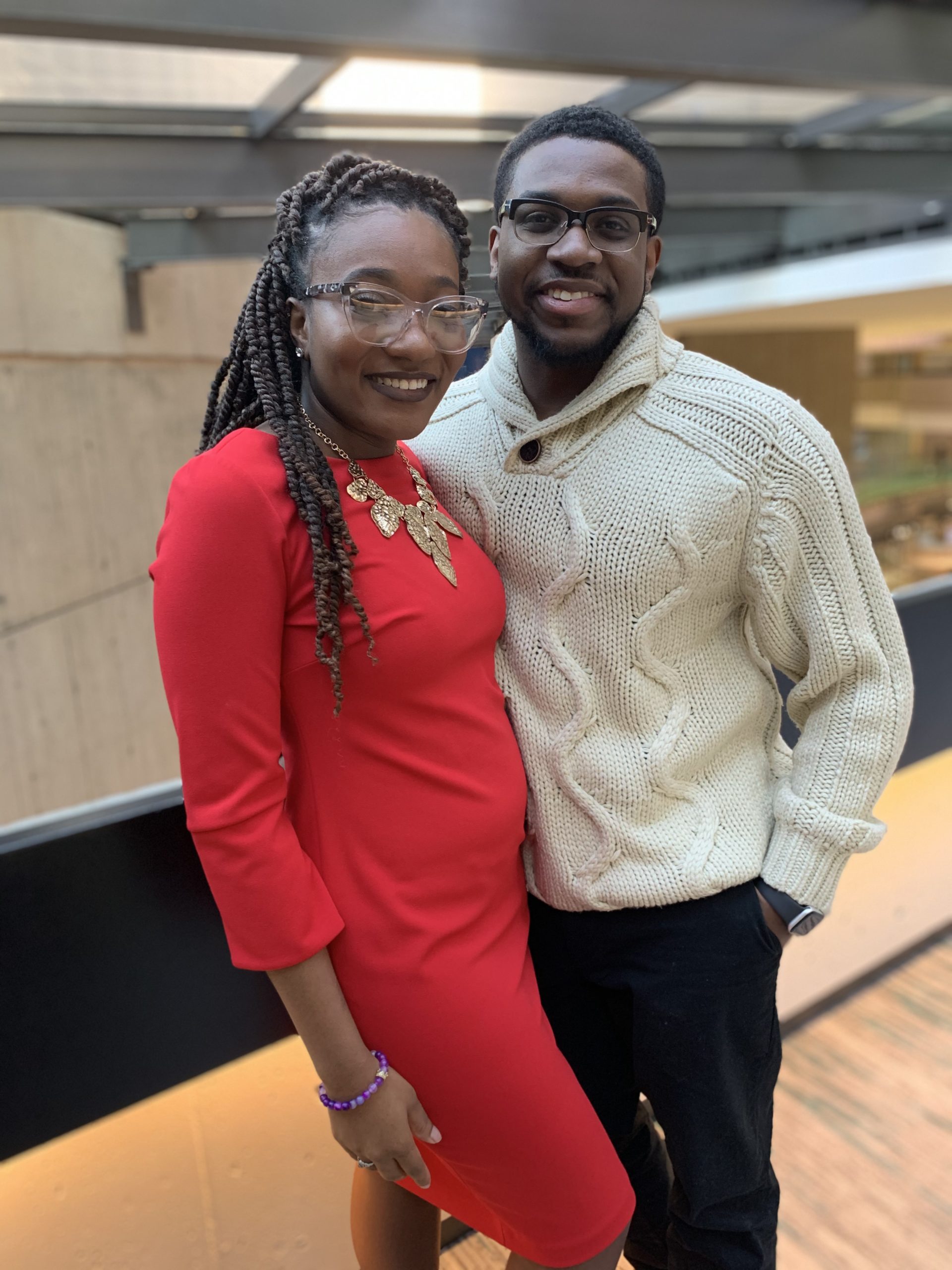 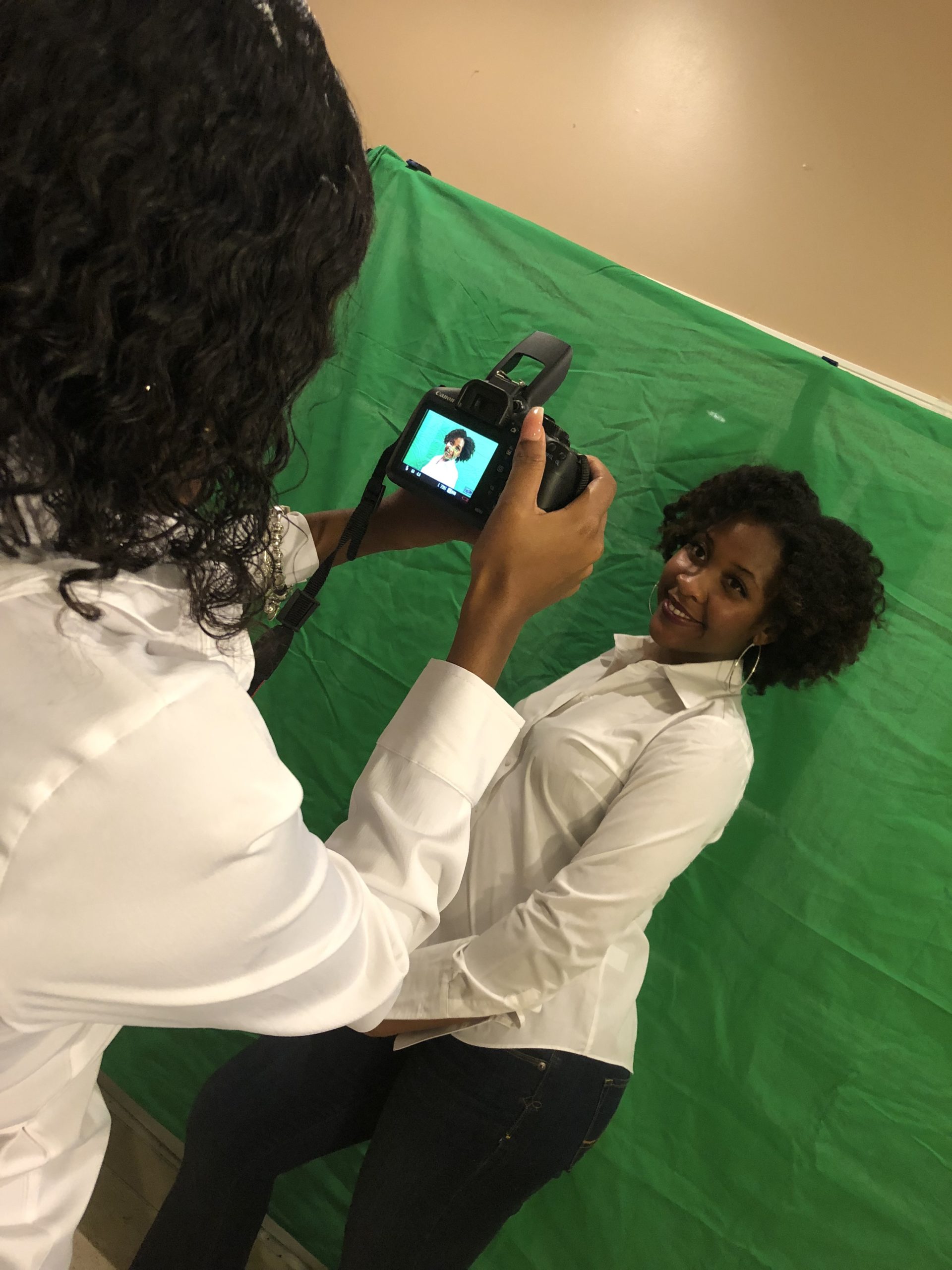 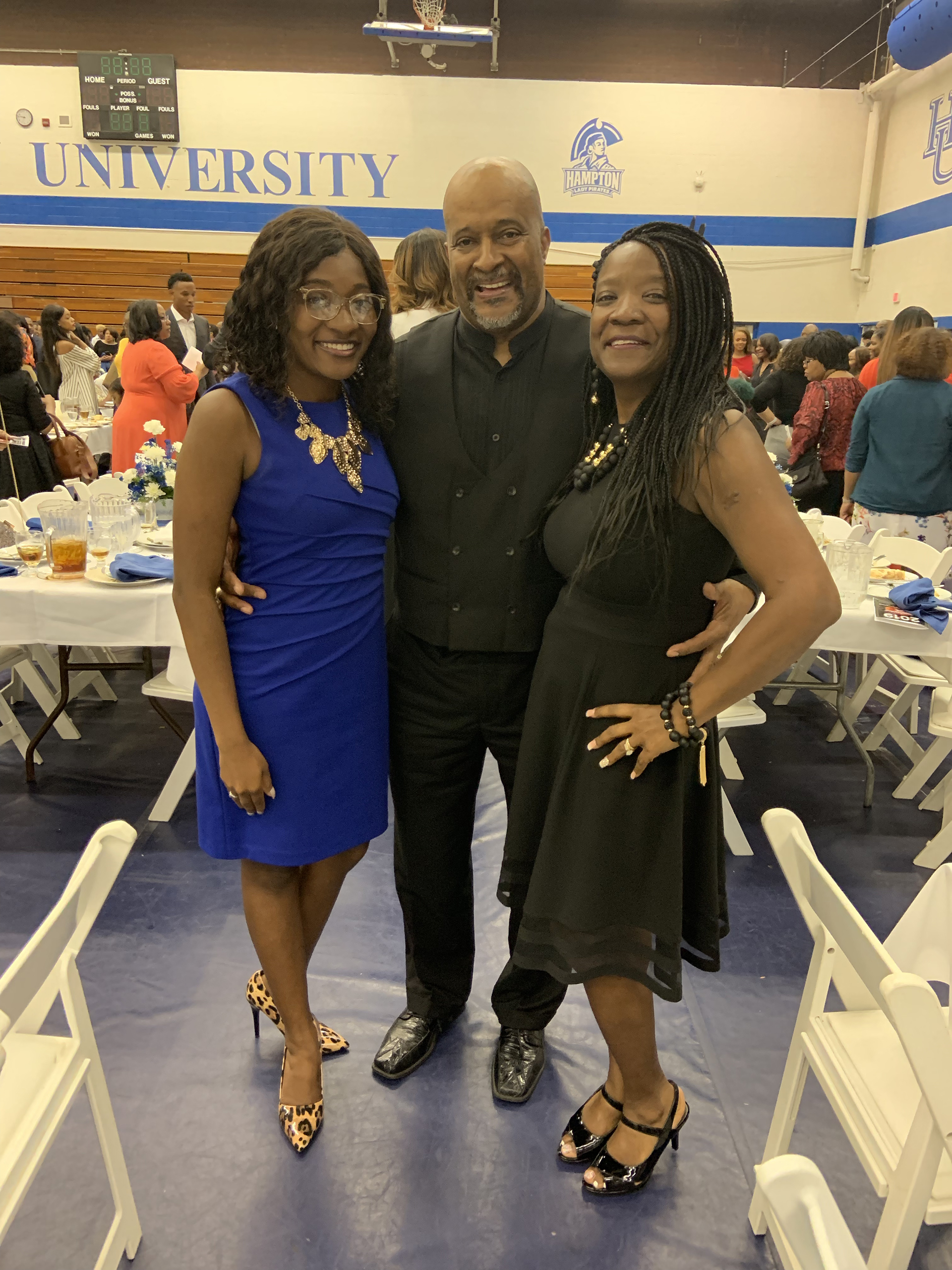 Wright has credited those in her close circle to be motivating forces to start and continue her business – whether they know it or not. From top left: high-school mentor Mr. Gamlin, boyfriend Alton, Kyla’s parents, a product shoot with a friend. (Photos courtesy of Kyla Wright)

Since the COVID-19 outbreak, I’ve had the opportunity to think about what’s important — such as community development and empowerment and connection and support — among Black entrepreneurs. I haven’t been home for longer than a month at a time since going away to college in 2015. Now that I’ve been home in Detroit for more than three months, I’m more aware of my surroundings. I’m no longer buried by books and am buried into my community. I want K’Luxe to be a part of a community of businesses with the aim to help others in some way. In my research about social entrepreneurship for Socially Driven, I stumbled across the University of Detroit Mercy’s Center for Social Entrepreneurship Boost Program to receive “strategies and materials to grow their organization in a financially sustainable manner and apply for the funding to reach the next level of growth,” according to their site. I’ll be applying soon.

When I told my parents about the program at my mom’s alma mater, they wanted me to apply that day. I’m very fortunate to have supportive parents both emotionally and financially. When I decided to start my own company, my mom sat with me at the nail salon one afternoon and helped me brainstorm names, logo sketches, and the items I wanted to sell. Neither she nor my dad batted an eye when I asked if they could purchase some sample products online before deciding if they’d be good for my brand. They’d take pictures of and for me, assisted in logo selections, and would listen to my rants from a delay in product shipment to receiving my first online sale. When I’d look to a celebrity cosmetic line or attempt to compare myself, they’d quickly nip that conversation, and that’s what I needed.

They’d tell me that I’m Kyla Wright: founder and CEO of The K’Luxe Experience, and that’s who I’m meant to be. I’m no Rihanna or Kylie Jenner, but I don’t aim to be. It’s unlikely that I’ll have the status or network of their cosmetic lines, but I am in pursuit of a different goal — to create community. I want to interact with my customers, receive feedback from them, and most importantly, give back to them. Over the last few months I’ve been thinking of socially driven ideas that would make sense for the business. Even though I know that the social aspect of the business doesn’t have to be directly related to the company, I want mine to. I’ve decided to apply for grants and set aside a percentage of earnings to fund a scholarship, and I’m hoping to award one or two scholarships in spring 2021 to a woman of color in the business field or in cosmetology school. I would be doing K’Luxe, myself, and other women a disservice if I didn’t aim to serve as a positive role model not only at home, but in the Black community.

These ideas didn’t happen overnight, though. There were many long conversations and random texts to my boyfriend, Alton — who’s also an entrepreneur — about what to do next, when, and how. I appreciate the fact that most times he wouldn’t give me a direct answer, but guided my thinking and allowed me to answer the question myself. He’s assisting me with the creation of my business plan since I didn’t make one at the inception of K’Luxe. But now the expansion plans and applications to additional opportunities for funding require it. Alton is also in the process of rebranding his business, a t-shirt and empowerment brand, called B.lack E.xcellence, and transitioning it into a social enterprise. Though his idea to give back existed before I came along, I like to think that I gave an additional push to do so, as he did to me. We both consider it important, as two young Black entrepreneurs, to find a way to create change and want it to start with our businesses. This is why K’Luxe is no longer about money.

The Black community often falls victim to negative stereotypes, especially those associated with our women — from video vixens to loud, uneducated single mothers. But I want to be a role model to the little girls I know and those I don’t, show them that you can come from any background and do anything — from graduating from college with two degrees to starting a business or helping others (or all three). It’s possible because I did it. Whether it be a push in the form of a scholarship or a simple conversation, as the face of K’Luxe, I want those girls to know I’m there.

#Repost – yesterday was definitely a proud moment! Coached my team and we got the gold. Hard work pays off 🙌🏾 #CampEnterprise2015 #Mentorship 🏆

As one of the youngest coaches at the New Detroit’s Camp Enterprise, I didn’t realize the impact I’d have on my students and vice versa. I remember an all-nighter spent with my team before a pitch competition. As the midnight hour crept, one young lady cried, as she succumbed to the pressures of the competition. I pulled her into the hallway and said, “If you quit, then you can’t be an inspiration to the girls who come after you.” Not only did our team win first place that year, but that advice, too, was a winner, in my book and hopefully hers. Our team won first place.

Kyla L. Wright is the editor-in-chief of Socially Driven. Born and raised in Detroit, Kyla received opportunities to be a spokesperson for many organizations that she was a part of – which is how she discovered her interest in writing and public speaking. To further her education, Kyla pursued her bachelor’s degree in journalism at Hampton University and her master's degree in magazine, newspaper and online journalism at Syracuse University. Beyond writing, Kyla has also had on-camera opportunities with the Orange Television Network, NABJ, and through her YouTube talk show, Kyla’s Korner.

Kyla L. Wright is the editor-in-chief of Socially Driven. Born and raised in Detroit, Kyla received opportunities to be a spokesperson for many organizations that she was a part of – which is how she discovered her interest in writing and public speaking. To further her education, Kyla pursued her bachelor’s degree in journalism at Hampton University and her master's degree in magazine, newspaper and online journalism at Syracuse University. Beyond writing, Kyla has also had on-camera opportunities with the Orange Television Network, NABJ, and through her YouTube talk show, Kyla’s Korner.