Merit Goodness Teaches Students Their Worth

In Detroit, one in four students will not graduate high school on time. In America, one student drops out of high school every minute. Detroit native Tyler Stewart beat those odds. He graduated from high school in June and will attend Albion College in the fall. Stewart participated in the FATE program, a four-year mentorship program founded by David Merritt, the 33-year-old owner of cause-based fashion brand, Merit Goodness. The FATE program helped Stewart decide what to pursue at Albion College. “I want to go along the line of marketing, like stuff that we did ninth grade year,” Stewart says. In ninth grade the FATE students create print advertisements and commercials to promote Give Merit, the non-profit arm that funds the FATE program and offers $5,000 scholarships to each of the graduating seniors in the program. Stewart hopes that a degree in entrepreneurship will put him on track to promote people’s businesses through advertising.

He partnered with Detroit’s Jalen Rose Leadership Academy, a public charter high school with more than 400 students in grades nine through 12, to recruit students for FATE. Of those 400 students, 90 participate in the program. In 2011, FATE had its first cohort of 22 students when the school opened, and that cohort had a 100% graduation rate in 2016 compared to 78% of Detroit Public School students that same year. FATE recruits a new cohort each year with an average of 25 students, according to Merritt. To be in the program, students are required to do community service and maintain a 2.5 GPA.

David Merritt (left) founded Merit Goodness and Give Merit. He and Kuhu Saha (right) have worked together since they were both in college at the University of Michigan. (Photo courtesy of Kuhu Saha)

Merritt started Merit Goodness in 2012, just three years out of college when he was 25. He graduated from the University of Michigan in 2008 with a degree in sports management. At U of M, Merritt was a walk-on for the basketball team and played from 2006 to 2009, and he earned an array of awards in categories including academics, leadership, and hustle. All of these values are what makes Merritt a strong entrepreneur, and he ultimately saw clothing as the best way to spread his message of supporting youth and relating to people. “I think fashion is just the perfect medium because we are, especially at the beginning, attempting for this to be not only fashion and a great product, but ultimately a mission and a message that has sort of long-term impact,” Merritt says.

In addition to Merit Goodness and Give Merit, the 33-year-old is also an ordained pastor at his parent’s church, Straight Gate International Church, and the co-owner of Narrow Way Café & Shop with his brother Jonathan, his father Andrew, and Sabrina Swim; both are located in Detroit. People ask Merritt the purpose behind each of his endeavors, to which he answers: “I think the biggest connection between everything I have [is] the amazing opportunity to be involved in is just this mindset that my parents have given us, in terms of how we serve people,” Merritt says. “If you’re serving people and meeting their needs, you can also be good at business because, ultimately, you’re creating something that consumers not only want, but they need.”

Kuhu Saha, executive director of Give Merit, has worked with and known Merritt for many years and says she’s always been aware of his desire to help people. To her, the way that his organizations — Give Merit, FATE, and Merit Goodness — intertwine is beneficial to each company, but she knows that it’s a big undertaking, regardless. 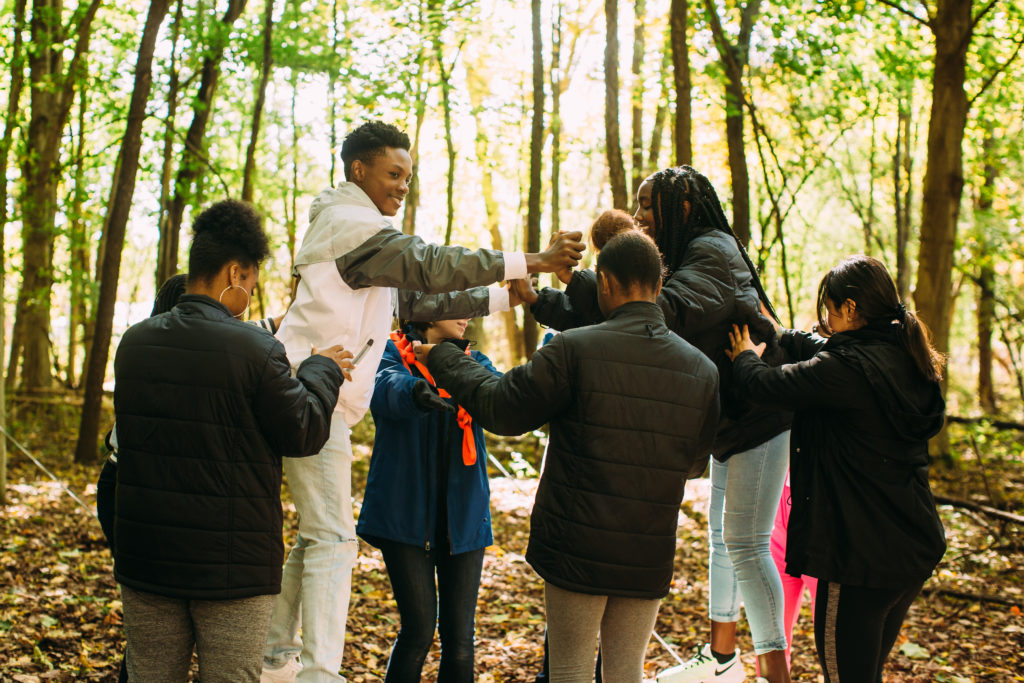 Saha started working with Merritt when they were both in college. She was part of an earlier endeavor that Merritt started in 2009 called “I Miss You,” a clothing line similar to Merit Goodness that offered t-shirts with inspirational messages and encouraged its employees and customers to participate in community service. They ran IMU together for a year-and-a-half before pivoting to Give Merit and their current model of running a profit-based business that supports their non-profit. In the FATE program, the students learn to think like entrepreneurs through a 10th grade capstone project, which places students in groups with the goal of creating a line for Merit Goodness. They produce a sample size of the collection, and typically, in a non-pandemic environment, they create trade show booths as part of a showcase and invite the community to attend and purchase the student designs. Each student has the opportunity to pre-sell their clothing two weeks prior to the showcase, and the team with the most pre-orders wins the competition. This year’s winning collection was Encouraging a Culture of Uniqueness. It features three t-shirts, a hoodie, sweatshirt, baseball cap, and sweatpants with colorful logos that combine FATE and Merit Goodness. The winning collections each year are featured on Merit Goodness. Each of the capstone experiences, while related to design and fashion, offer skills that Meritt and Saha believe transfer to professions. “Whether you actually go into fashion, or you want to be a doctor. We really think that this sort of design thinking is going to be very important no matter what,” says Merritt.

“If you’re serving people and meeting their needs, you can also be good at business because, ultimately, you’re creating something that consumers not only want, but they need,” Merritt says.

Mentorship also plays a key role in the program — and not just from Merritt and Saha but from college-student volunteers. More than 60 students from the U of M commit to at least one year of mentorship with the program. They make the 45-minute drive from Ann Arbor to Detroit for the workshops that occur once a week during the school year. Each cohort attends the workshops on a different day of the week. Recent U of M graduate and Detroit native Eboni Sawyer served as a FATE mentor all four years in college, helping students with their capstone projects during workshops each year and building relationships with them. Sawyer started mentoring the same year that Tyler Stewart, the to-be Albion College student, joined the FATE program, and she got to see the cohort graduate this past June. “It was really a great experience for me to watch them grow right from ninth grade to 11th grade. It was such a huge jump in maturity,” Sawyer says. She admits she became emotional watching the graduation. “I was watching the graduation and I went, ‘oh my god we graduated.’”

Hannah Lees is the social media manager of Socially Driven. She earned a bachelor’s degree in fashion merchandising from Cazenovia College before attending the S.I. Newhouse School of Public Communications at Syracuse University for a master’s degree in journalism. While at Syracuse, she was an editor for Zipped magazine and a reporting intern at Advance Media New York.

Hannah Lees is the social media manager of Socially Driven. She earned a bachelor’s degree in fashion merchandising from Cazenovia College before attending the S.I. Newhouse School of Public Communications at Syracuse University for a master’s degree in journalism. While at Syracuse, she was an editor for Zipped magazine and a reporting intern at Advance Media New York.