How to Boost Your Brand and Expand Its Impact

Lacing boots is something Marine veteran Nick Mendoza did daily, so bootstrapping was a natural approach to starting his business, Band for Arms. With only $27.48, some pre-loved uniforms, and the help of two volunteers from his platoon, he was able to launch his social enterprise. Bands for Arms offers custom made bracelets made from a loved one’s military uniform, and 50% of the funds support military organizations like Operation Gratitude, The National World War II Museum in New Orleans, and The National 9/11 Memorial in New York City.

The idea came from a bullied sailor Mendoza mentored, though it was uncommon for marines and sailors to fraternize. Mendoza was able to help him forge friendships with 17 Marines that once hazed him. The sailor thanked Mendoza with a bracelet made from pieces of his and his new friends’ uniforms. When the sailor later died, Mendoza created Bands for Arms to honor him. Mendoza was clueless about building a brand identity, but says his business gained national attention when his story spread like wildfire.

For burgeoning social startups and entrepreneurs, branding can distinctively alter a company’s narrative and oftentimes determines its success. When a brand’s values, message, and overall image are consistent, revenue is likely to increase by 33%. For social entrepreneurs, increased revenue results in greater impact. Beyond business models, funding, and prototypes, familiarizing the public with your brand is a fundamental next step.

Oftentimes, new entrepreneurs don’t know where to start when building their brand. The Digital Branding Institute, a premier resource for digital branding insights and education, offers simple solutions for effective branding: selling your story, maximizing your visibility, and being visually appealing.

Stories not only build focus on a company’s identity and culture, but it shapes how clients and customers identify brands: on a personal level. The story will sell the experience before selling the product. Once the story is fully developed, social entrepreneurs can leverage this asset across multiple channels through integrated marketing campaigns to maximize visibility. To complete the brand’s story, a company’s look should consist of defining characteristics that cohesively communicate the company’s message.

Storytelling is an effective method for social entrepreneurs to build authentic, supportive communities and relationships while simultaneously building their businesses. Mendoza put his story at the forefront of his business and saw major success. When he launched the company on January 8, 2010, it was just him and two military buddies regularly meeting at the mess deck to play with uniform material and construct bracelets. He didn’t think so many others wanted to participate, but eventually it evolved into a team of 10 to 15 volunteers. Mendoza used his friends’ old, dirty uniforms as bracelet material but he needed to diversify his pick of uniforms, as his friends could only provide Navy and Marine options.

He didn’t have any marketing or strategic skills to contribute to his business, so he had his friend set up a Facebook page that highlighted his story. Mendoza says the page is where most of his uniform donations and customers came from in the beginning.

“I just relied on social media to exploit what I was doing. Facebook led me to the outreach of all the other military branches. Then it evolved into World War II veterans and the Vietnam War veterans, and then other world countries’ military branches were interested in donating,” Mendoza says.

Jennifer Hidinger-Kendrick, co-founder of Staplehouse and now executive director of its partnering nonprofit, The Giving Kitchen, has a story that attracted overwhelming support from her local Atlanta community and later nationwide. Her story transcended the brand, becoming a source of support, creating beneficial friendships with customers and communities, and ultimately fueling growth.

Staplehouse began as an underground supper club in her home kitchen with her late husband, chef Ryan Hidinger. They hosted weekly dinners for 10 guests for four years, and built a solid rapport with locals. When Ryan Hidinger was diagnosed with cancer, leaders and members of Atlanta’s Fourth Ward communities rallied together in the first fundraiser, Team Hidi, to support his medical bills. Hidinger and Hidinger-Kendrick were then able to maximize their visibility and launch their restaurant, Staplehouse, and soon after The Giving Kitchen. This nonprofit organization employs individuals impacted by illness, injury, death or a disaster as food service workers through social services, and covers their cost of living expenses.

“It was really our community and our friends who put that benefit together for us. Afterwards, we realized that there is nothing that existed in our community that helps one another in times of crisis, whether it’s a devastating medical diagnosis like Ryan received or an injury, another sickness, death of a family member, or a housing disaster,” Hidinger-Kendrick says. “It ignited the idea that this could be something bigger for our community and that’s really what exposed Staplehouse and Giving Kitchen to become what it is.”

In addition to letting the background story be the fuel that drives business and develops organic opportunities for growth, consistent visual appeal is a key element that ties your story and strategy together. Jennifer Harper, founder of Cheekbone Beauty, says she learned the power of visual branding early on, and she observed other social brands to get an idea of where to begin when she created her own. She would read about brands such as Toms Shoes and The Giving Keys that are driven by social cause. She used the same model to build her cosmetic company so that the foundation was about supporting education for Indigenous youth.

Harper started with $500 that she used to launch a website and take a couple of pictures of liquid lipsticks and complexion products that she purchased with a small amount of money. She worked in sales for a seafood company full-time while building the website, and she was able to apply her food service knowledge to the beauty space. 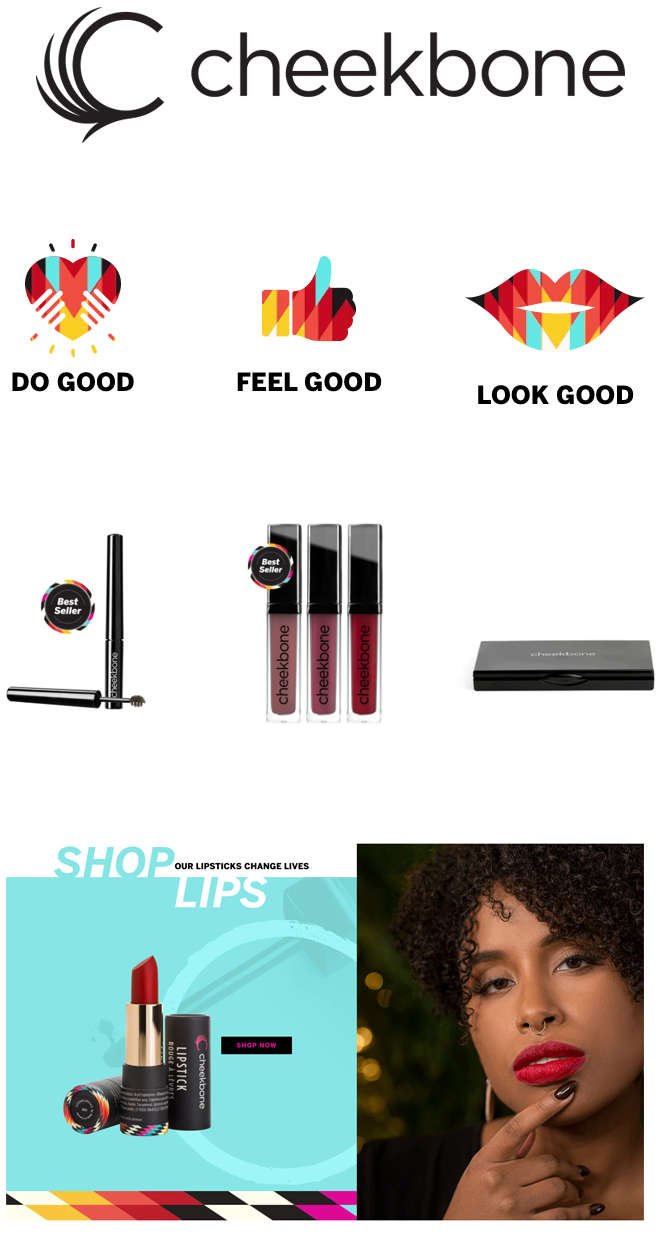 “Learning that the food industry and the beauty industry were very similar in a sense, there are manufacturers that make the exact same products that are put in different boxes or branded differently,” Harper says. “Knowing that existed, it works the exact same in the beauty world whether that’s skin care, hair care, a lot of brands are using the same manufacturer.”

Harper continued taking a grassroots approach to branding and marketing. She spent time perusing the sites of high-end cosmetic brands and observing their design aesthetic. She looked at their color palettes, fonts, layouts, and photo variety.

“When you Google building a brand, you’ll find that Canva is an app that can help you make all of those things and it’s pretty inexpensive,” Harper says. “Fiverr is another app that you can have somebody help you with graphic design for under $10 bucks versus going to a graphic designer face to face that’s going to charge you 70 dollars an hour.”

What to Expect When Building a Socially Conscious Business Next post