Business Lessons from the Pandemic

The coronavirus pandemic forced Jennie Light, owner of Bluebird Sky Yoga in Washington, D.C., to think about her community. She shut down her studio and decided to move it online following a weekend of testing software options — including Zoom and Facebook live. Light’s first digital sessions on March 15 shocked her. “It was just huge,” Light says. “Much more than we expected. We thought maybe we will get our usual 15 people for class.”

Bluebird Sky attracted more than 160 yogis for its second ever online class — including 130 on Facebook live. Despite job losses and furloughs that caused some members to cancel subscriptions, which range from $48 to $160 a month, Light’s considered the shift to online a success. As one of the first studios to move online, she says, that success allowed Bluebird Sky to evaluate their need for the small business grants that helped keep other entrepreneurs afloat.

Bluebird Sky’s successful transition online, however, was not unique. A CommerceNext report found 35.5% of all retail sales shifted from brick-and-mortar locations to digital operations during the COVID-19 pandemic, and experts predict a crash looms for the commercial real estate market.

After growth in the commercial real estate market cycle for “many years,” wrote Avis Devine, an associate professor of real estate at York University, we are now in a downturn. E-commerce retail revenue is up 68% compared to last year, and both real estate owners and entrepreneurs are forced to adapt, says Leonard Green, entrepreneur in residence at Babson College and author of The Entrepreneur’s Playbook. Social entrepreneurs like Light, however, were faced with the unique challenge of balancing salvaging their livelihood with sustaining a community connection and mission.

Cristina McCarter, owner of City Tasting Tours —  a Memphis-based small business that started in 2016 to bring awareness to and highlight local restaurants through culinary walking tours — struggled to reimagine how her business would survive after COVID-19 struck. “Everything I’d worked so hard for over the past three years was gone,” McCarter says. “It ended.”

Cristina McCarter delivers a digital food tour to a local patron. After McCarter moved her Memphis based food tour online in March, her audience — which is usually comprised of mostly tourists — has become exclusively local. (Photo courtesy of Cristina McCarter)

After a week of sitting at home, McCarter called the restaurants she relied upon and supported and pitched a move online. “I asked them what they thought about this idea and they all loved it,” she says. In two days, McCarter set pricing, filmed custom videos of the establishments, and began orchestrating door-to-door delivery of a four-restaurant virtual food tour. The tour includes a cheese dip appetizer from a local deli, an entree from The Grecian Gourmet or Rizzo’s, and dessert from a family-owned bakery.

After one month online, McCarter was able to write a $1,000 check for each of the four restaurants featured in the digital food tour, she says. Despite being fearful that online tours are unsustainable as her primary source of income, to be able to support the restaurants and continue her business in some capacity “felt really good,” she says.

“It’s never been just about me,” McCarter says. “It’s about all of us.”

With social distancing restrictions and restaurant capacities, City Tasting Tours has no plans to move off the digital platform until at least 2021. “I got great feedback off of it,” McCarter says. “I didn’t think I would — I wasn’t sure people would understand what I was trying to do.”

Maintaining your businesses’ community when moving digital is dependent on providing entertainment, serving the community, and having empathy, according to Sahail Ashraf for Business 2 Community. McCarter started her business in 2016 because seeing people eat local made her happy, she says, and after four years of supporting her community, during her shift online, the community supported her.

“It’s never been just about me,” McCarter says. “It’s about all of us.”

That community connection, Green says — that is particularly important for social entrepreneurs — isn’t going anywhere. “I think the brick-and-mortars are still going to be there because there is a social aspect to them that you don’t get in the convenience of buying things online,” Green says. “I don’t necessarily think you go into a store just to buy. I think you go in for the experience.”

While Bluebird Yoga’s consistent membership numbers have fallen as competing studios have transitioned online (Light estimates a 30% decrease in profits) its staff learned how to use Zoom and other streaming platforms to accommodate a national and global audience. Light says she also has worked to bring their social good to the new online space. The yoga studio sells shirts with all proceeds going toward Dash DC, a domestic violence shelter, and has hosted trauma-informed yoga sessions with participants from all over the world. 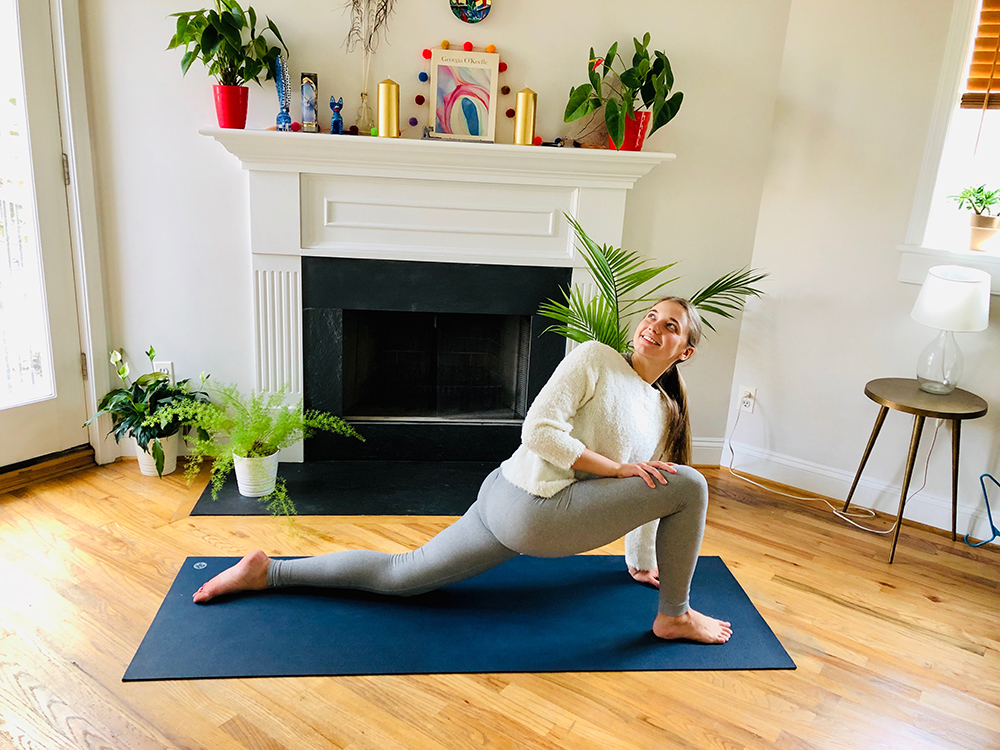 Bluebird Sky Yoga is a community-based yoga studio that brings yoga and local art to the Brookland neighborhood in Washington D.C. Due to the coronavirus pandemic, they currently host all classes online. (Photo courtesy of BlueSky Yoga)

In the physical studio, Bluebird normally displayed and helped sell local artists’ work. But they relocated that work to a new virtual gallery and host Q&A sessions with featured artists on Instagram. While economic pressures during the pandemic have forced a worldwide slump in luxury purchases, including a 72% decline in art sales, according to The Art Newspaper, Bluebird’s art sales have stayed nearly the same as pre-COVID, and they offer art-shipping services across the United States. “It’s interesting because some of our clients are not in financial positions to purchase anything right now,” Light says. “And others are wanting to support the businesses they love and support the creative economy.”

“I think the brick-and-mortars are still going to be there because there is a social aspect to them that you don’t get in the convenience of buying things online,” Green says. “I don’t necessarily think you go into a store just to buy. I think you go in for the experience.”

Prior to the pandemic, McCarter’s City Tasting Tours was working to expand their audience. “When you hear the word ‘tour’ you automatically think ‘tourist’,” McCarter says. “But over the past year I’ve started trying to get more love from the locals.” When COVID-19 eliminated tourism, McCarter was forced to double down on the audience shift, catering to elderly people who are unable to go on the walking tours or people trying to sample a few restaurants at a time.

McCarter’s digital tour has become an anniversary gift, graduation surprise, or a change-of-pace dinner for locals just trying to support local businesses. The fear McCarter had that her audience wouldn’t understand her mission evaporated.

“Word of mouth goes a long way in Memphis,” McCarter says. “We have a big, small town.”

Mitchell Bannon is a staff writer for Socially Driven. Originally from Toronto, Canada, Mitchell is a graduate of McGill University and the S.I. Newhouse School of Public Communications at Syracuse University. With a master’s degree in magazine, newspaper, and online journalism, Mitchell hopes to combine his passion for analytics, sports opinion, and reporting as a sportswriter.

Social Media Tools to Grow Your Business Next post

Mitchell Bannon is a staff writer for Socially Driven. Originally from Toronto, Canada, Mitchell is a graduate of McGill University and the S.I. Newhouse School of Public Communications at Syracuse University. With a master’s degree in magazine, newspaper, and online journalism, Mitchell hopes to combine his passion for analytics, sports opinion, and reporting as a sportswriter. 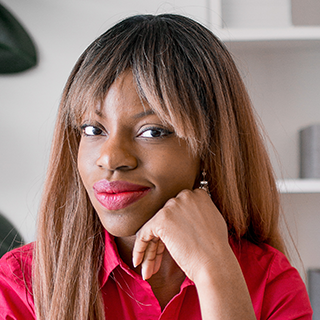 Business tech-consultant and automator Enoma Osakue, 23, makes tools communicate with each other and helps business owners choose software to accomplish their goals. Consulting for companies like FiveStone and running her own business, Hello It’s E, Osakue writes scripts and uses code that allows tools to do more with fewer people and minimal effort. She also specializes in “no-code tools,” and shares those tools on her blog where she routinely recommends software solutions to subscribers looking to find effective resources to help run their business. Osakue says it’s best to start free. “Keep things as lean as possible while you prove the demand for the product,” she says. “They're often a lot of free tools or freemium tools that will help you do the minimum, and then as you grow as a company, you can pay for paid plans.”

Here, Osakue offers some of her favorite tools, broken down into three categories, which she says every entrepreneur should consider using when moving their enterprise to a digital-only space.

Email Communication Tools
Intercom, G-Suite, and Zoho Mail: “These allow you to have direct relationships with clients or with potential customers. If you've ever been on a website and seen a bubble in the bottom right that lets you actually send a message or request help from a team member, they're using a tool like Intercom. Every business needs to be able to communicate directly with their customers, via email especially.”

Productivity and Task Management Tools
ClickUp and Asana: As a certified consultant for ClickUp and an Asana user, she recommends using the free version to help keep up with tasks, goals, and company messaging. “No matter the industry, every business is going to need to keep track of what needs to get done, and who it needs to get done by,” she says. “The ability to communicate without having to be online together at the same time increases the value you can provide to your team members so that they can get stuff done.”

Invoicing and Money Management
You Need a Budget app and Quickbooks: “At the end of the day, if you’re not making money, then it’s not business. Every business should be able to track money coming in and money going out. You Need A Budget app is a personal budgeting app that I think is great for teaching the basics of understanding money management. I encourage anyone who is thinking about starting a nonprofit or a business to understand money well — even if they don't think of themselves as an entrepreneur. It will be a good foundation for whenever you have to manage money for a business.”