Rows of colorful nail polish line the exposed-brick walls and frame two Black women — owners of  The Brooklyn Nail Company Rosaline Gordon and Cicely Whyte — as they smile into the camera for an episode of Secretly Awesome on the network Localish. They wear black, short-sleeve jackets with their names in cursive and BKNC in red embroidery and share the details of how their business began. During the program, they talk about learning they were sisters, how they found the turn-key location for their business on Craigslist, and why they offer Tuesday discounts on mani-pedi packages to senior citizens. “Once we found each other, we wanted to turn our pain into profit,” says Gordon, who was searching for her father when she found Whyte and then a few months later decided to open the salon with her sister. “It’s definitely not an easy process, but it’s doable.”

Those insider details and the opportunity to showcase local businesses inform the concept and the mission behind Secretly Awesome, which began in September 2018 on ABC.com with the goal of highlighting distinctive, community-minded businesses, products, and experiences. Its network, Localish, debuted on cable in the first quarter of 2020 and can be found in major cities such as New York, Los Angeles, and Chicago. Former vice president of content development for ABC, Jennifer Mitchell, told nexttv.com the platform attracted about 63 million viewers. 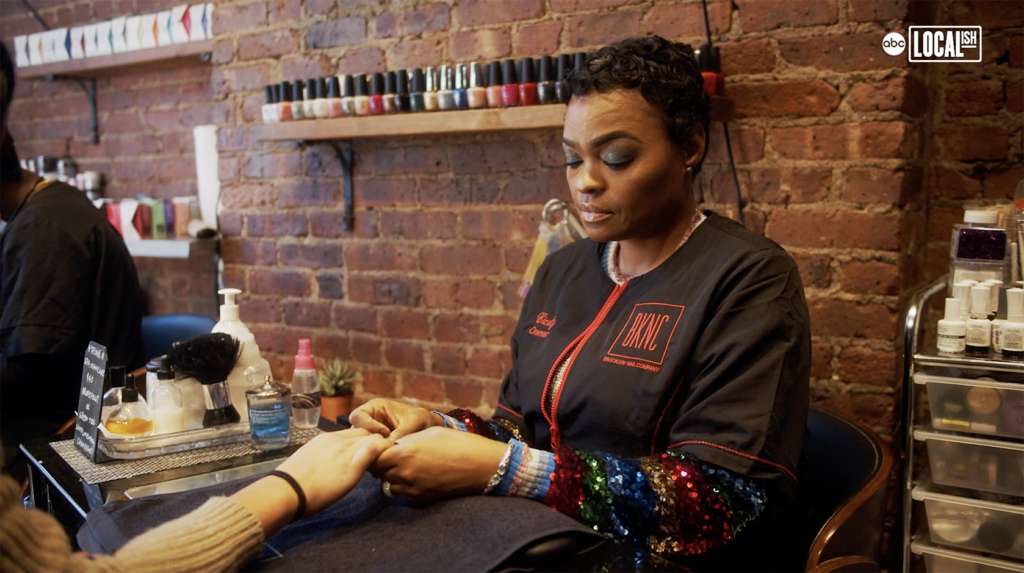 While searching for her father, Rosaline Gordon found Cicely Whyte (pictured above), and the two sisters opened Brooklyn Nail Company after finding a turnkey property on Craigslist. (Photo courtesy of Localish)

Wendy McMahon, the president of ABC owned television stations and the leader for Localish, says that a desire to attract younger audiences, who embrace new story forms and consume media differently than the older, television viewer, informed the network’s creation. “We introduced it to create a safe space for the next generation for multiplatform storytelling that could live across platforms and not be constructed first for television,” McMahon says.

Secretly Awesome acts on that mission by highlighting a neighborhood’s uniqueness through the most interesting businesses. Unlike other shows that leverage entrepreneurship as entertainment — witness Shark Tank, The Profit and Undercover Boss — Secretly Awesome profiles small, local businesses with a passion for the community in which they operate. “We knew we wanted to do something about small business owners who were kind of having a big impact,” Michael Koenigs, the show’s creator and executive producer, says. “The kind of hidden gems that locals love and in large part the owners were so charismatic, and we wanted to show off their personalities and the businesses they had created.”  The series was just renewed for a second season with more than 50 episodes.

Amanda Bryant, a content producer at Localish, echoes the opinion of fellow staffers about the important role local businesses play in community-building. “We recognize that local businesses fill the economy of what Localish is about, which is serving your community,” Bryant says. She believes real value exists in the work of the show, which features not only the products but also those behind them and the issues and ideas that drive them. “I think it’s super important.” Bryant says. “I love being able to give these small companies and these people who might not be able to reach a larger audience or might not be able to expand their voice with the platform they have.” 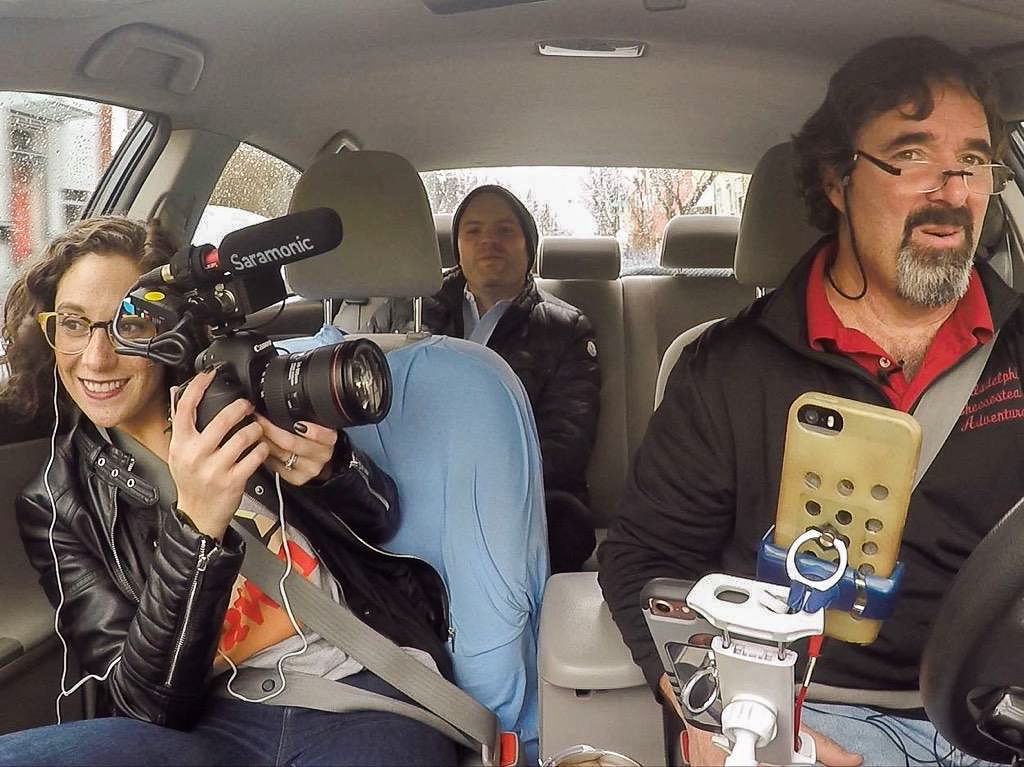 Amanda Bryant, a Localish producer, says she enjoys giving a voice to local entrepreneurs through her work on the show. (Photo courtesy of Localish)

Brooklyn Nail Company’s Gordon credits a customer, who nominated the Bedford-Stuyvesant salon, for helping her and her sister earn a spot on the show. After a phone call from the show, the crew showed up two weeks later and spent a Tuesday morning filming. Tuesdays serve as an important day at the salon because they devote that day to senior citizens by offering them discounts on manicure and pedicure packages. Gordon says it is both a way to honor her late grandmother and a way to celebrate these women. “I have a soft spot. I was really close to my grandmother,” Gordan says. “And working with her, and being with her, and serving her and caring for her, I realized how many seniors didn’t have that. They don’t have someone that comes along and around on a regular basis checking for them. It just always stayed with me.”

Inspired by her grandmother’s memory and after talking it over with her sister, they moved forward with the idea to serve those members of their community. “I feel like they are the forgotten gems of our community. I just wanted to let them know that as a business in the community, we have not,” Gordon says. 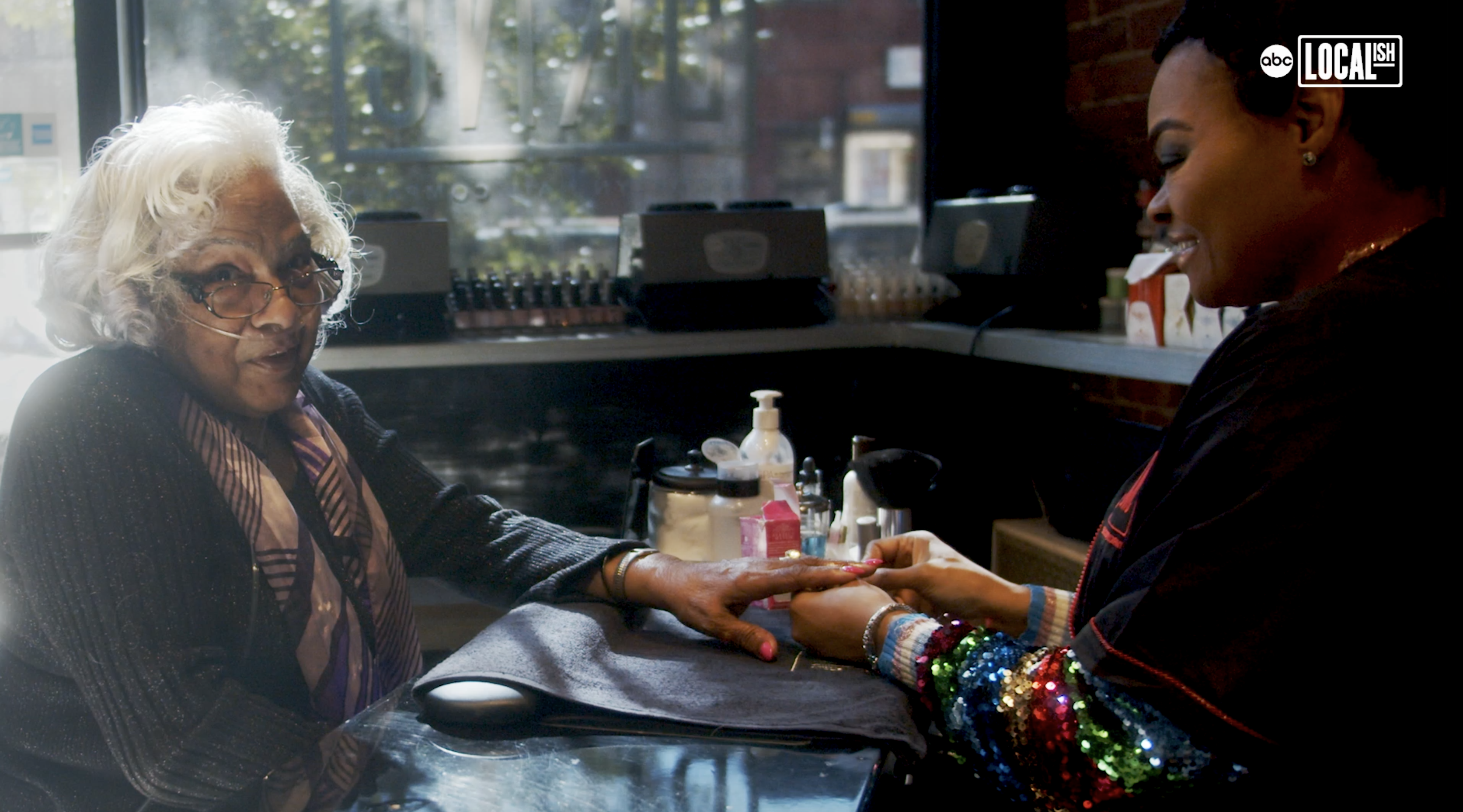 Ciecly Whyte works on a customer’s nails as part of the Tuesday morning package. The salon dedicates Tuesdays to providing discounted services to senior citizens. (Photo courtesy of Localish)

“Especially during times like these with COVID disproportionately impacting local businesses, local services it is important to highlight their crucial role in the community as they get through this tough time,” Koenigs says. “I think there’s gonna be a real resurgence in people wanting to explore their cities partially because they are not gonna to be able to travel a lot by airplane quite as easily.” Koenigs believes that the fear of traveling will prompt people to reconsider all the opportunities that exist close to home, creating an opportunity for local businesses and entrepreneurs to build a momentum and an audience. And that mirrors the experience of the co-owners of Brooklyn Nail Company. Gordon says that being on the show helped earn them exposure to new customers and earned the duo a larger following.

“Sometimes you’ve gotta instead of just going in and buying something and walking out, try to find that deeper layer,” Koenigs says. “We want people to almost feel like they have a friend by the time they finish the piece.”

Camille Daniels is a staff writer for Socially Driven. She earned a master's degree in magazine, newspaper, and online journalism at the S.I. Newhouse School of Public Communications at Syracuse University. She finds the behaviors of people fascinating as one person’s choices can impact so many other people. She enjoys learning, and you can find her reading or listening to intellectual conversations. Camille also loves the arts and can be found writing creatively, cooking, or watching television or a movie. When needing to relax she likes to swim. Camille is from Jamaica, N.Y.

Camille Daniels is a staff writer for Socially Driven. She earned a master's degree in magazine, newspaper, and online journalism at the S.I. Newhouse School of Public Communications at Syracuse University. She finds the behaviors of people fascinating as one person’s choices can impact so many other people. She enjoys learning, and you can find her reading or listening to intellectual conversations. Camille also loves the arts and can be found writing creatively, cooking, or watching television or a movie. When needing to relax she likes to swim. Camille is from Jamaica, N.Y.